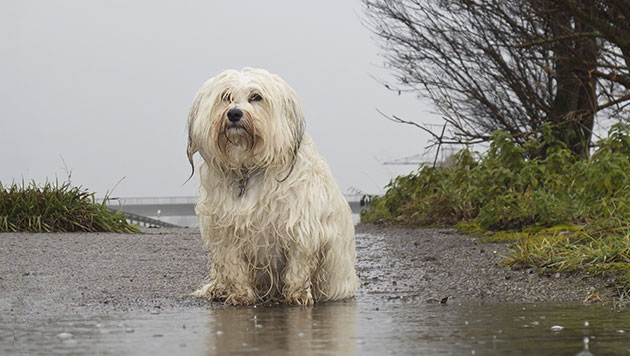 There's no doubt that dogs are amazing, incredible, fantastic, wondrous, astounding and remarkable (not to mention totally lovable), so it's hard to know where fact ends and fiction begins.

Let's lift the mythic veil and sniff out the truth.

Do all dogs have a grudge against the mail carrier?

Conventional wisdom tells us that the sight of a mail carrier makes dogs go postal. But most often this is nothing personal against the person who delivers your mail. It's just your dog's instinct to protect his home and family from trespassers. So, when the mail carrier comes up to the door, your dog instinctively barks and/or chases — even if there are no bills in the mail. And if the dog succeeds in making the mail carrier walk away, his behavior has been rewarded — and he may continue to bark when the mail carrier returns on other days.

Are dogs and cats natural enemies?

If cartoons were reality, as soon as every dog saw a cat it would give chase, accompanied by a zippy musical soundtrack. Those of us who have successfully raised dogs and cats together, however, know that these two lovable species can — and often do — peacefully coexist. However, if the dog and cat in question have never met before, it's quite possible that the dog (especially if it's one that likes to give chase to smaller animals) will try to take some kind of action against the cat. This natural reaction is called "predatory reaction."

Is chocolate really bad for dogs?

Chocolate is sweet, delicious and (according to research) has health benefits. For humans. Dogs, however, are another species. The fact is that chocolate can trigger life-threatening illnesses in dogs. In fact, an ounce of chocolate can be toxic to a 30-pound dog, and many dogs can easily consume more than that.

Can dogs detect storms before they happen?

While no one can be 100% certain, it's likely that some sensitive dogs know a storm is brewing because they can hear it, smell it and even feel it, long before us humans.

Can dogs sense the presence of ghosts?

The jury's still out on this issue, but some people are dead certain that dogs can tell when there's a ghost nearby. However, until a ghost confirms this, we'll remain skeptical. For now, this myth is filed under "Spectral Speculation."

Over the years, there have been innumerable stories about dogs sniffing out cancer in humans and predicting heart attacks and seizures in their owners. Now scientists are taking notice and trying to prove what many of us dog lovers already accept as fact: Dogs are amazingly sensitive to our tiniest problems, issues, concerns and changes. And if you're among the skeptics who don't believe that dogs can detect human health issues, there's one thing you can't deny: Dogs can make us feel a lot better when we're under the weather.

Fact: St. Bernard dogs have traditionally been bred for rescue operations in alpine regions. Myth: These dogs carry little kegs of brandy around their necks to warm trapped/lost/injured mountaineers and skiers. This myth probably dates to the early 19th century, when the English artist, Edwin Landseer, painted a fanciful image of an "alpine mastiff" with a keg of brandy around its neck.

Did a dog really save citizens of Johnstown, Pennsylvania, during the Great Flood of 1889?

We don't doubt for a moment that, throughout history, dogs have saved the lives of many humans. We've all heard stories about dogs barking to wake or warn their masters, dogs that have pulled people from burning buildings, etc. One of the most famous dog-saving-people stories involves Morley, the dog that allegedly saved some Johnstown children from the onrushing floodwaters in 1889. We'd love to believe that this really happened, but, alas, it's a tale invented by a resident of Johnstown at the time: Michael Dudek, who was an author, wrote a fiction book that starred his dog Morley. Over the years, the story he penned about Morley's courage during the flood has been accepted as fact by some people.

Is your dog the most wonderful creature in the universe?

This isn't a myth. It's a fact. And you didn't need us to tell you that.

Dollar General is not responsible for the content above and disclaims all liability therefrom. Dollar General does not sponsor, recommend or endorse any third party, product, service, or information provided on this site. All content provided herein is for educational purposes only. It is provided “as is” and as such, the accuracy of same is not warranted in any way. Such content is intended to supplement, not substitute for, the diagnosis, treatment and advice of a veterinarian. Such content does not cover all possible side effects of any new or different dietary program or skin/coat program for your pet. Consult your veterinarian for guidance before changing or undertaking a new diet or grooming plan.

If your pet has dietary restrictions and/or allergies, always read the ingredient list carefully for all food or grooming products prior to using. Neither Triad Digital Media, LLC nor Dollar General make any representations as to the accuracy or efficacy of the information provided nor do they assume any responsibility for errors, omissions or contrary interpretation of the subject matter herein. Special written permission is required to reproduce in any manner, in whole or in part. Get Any Teaching Area Ready with this Checklist
View Article You are already building a Pickup Shipping Order

Changing your order type will cancel your order, and clear your cart

How are you shopping today?

How do rebates work?

Please provide your date of birth and zip code so we can determine if you're eligible for this rebate.

You are not eligible for this rebate

Unfortunately, you don’t meet the location requirements for this rebate.

If you think this is a mistake, re-enter your zip code to try again.

We were unable to update your zip code in your profile, but you can still continue with the rebate process.

Your profile has been updated.

Please connect a PayPal account so you can receive rebate payments.

The information you entered does not match PayPal.

Please check your PayPal account and enter the correct information.

Enter your phone number at the register when you checkout.

3 - 7 days after a qualified purchase, your PayPal account will be credited and you'll receive a confirmation email from coupons@email.coupons.com

Changing your order type may impact availability of items already in your cart.

You’re starting a DG Pickup order.
Please confirm the store where you want to pick up your order.

Want to remember this item for later? Move it to your shopping list

Do you want to cancel this order?