13 Things You Didn't Know About Dogs 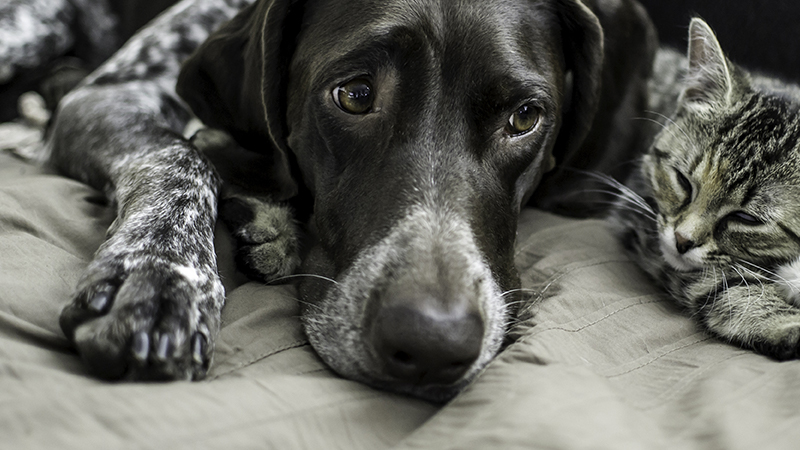 Did you know that Heartland Farms offers premium pet food that's tasty, nutritious and made in the USA? Well now you do. When it comes to your dog, you probably think you know everything: what kind of toys they like, the way they like their belly scratched, and their favorite place to take a walk. With so many urban legends, myths, and misconceptions about dogs in general, we’re here to set the record straight, and share some fun facts you may not have known!

3. The “7 years rule” for calculating dog age is not exactly accurate. Most experts suggest that the first year for dogs is equivalent to 15 human years, add 9 years in year 2, and 5 years for every following year. So, after 4 human years, your pup would be about 34 dog years old!

4. Dogs are often thought to only see in black and white, but they do see color –- closer to the spectrum of a human with colorblindness..

5. Dog noses are wet to help trap in scents. Fun fact: Did you know that Bloodhounds can track scents that are up to 300 hours old? That’s over 12 days!

7. Dogs can hear 4 times the distance of humans. They have 18 muscles in their ears! Now that is a strong sense of hearing.

9. Dogs can understand, on average, anywhere from 150 – 250 words, placing them at the vocabulary level of a 2-year-old human.

11. The term “dog days of summer” goes back to ancient Greek and Roman cultures. The official dates are July 22 through August 23, and characterize what is typically the hottest part of summer.

12. Simply petting a dog can lower your blood pressure.

13. Some dogs are trained to notice the change in human breath scents that indicate a change in blood sugar levels. This means they can notify their owner before they go into diabetic shock.

Who knew so much about dogs? The fine folks at Heartland Farms, probably. Their dog food is nutritious, flavorful and made right here in America with only the finest quality ingredients. The Dish on How Much to Feed Your Cat
Read More Check out with DG Buy Now Pay Later
in-store, or by using DG Pickup or DGGO!
Split your order into 4 interest-free
payments over 6 weeks.

No interest, ever
Plus no fees if you pay on time

You're all set!
Use DG Buy Now Pay Later powered by Sezzle
during your next checkout.

You're about view screens
offered by our trusted partner,
Sezzle.

You are already building a Pickup Shipping Order

Changing your order type will cancel your order, and clear your cart

How are you shopping today?

Ship it to me

This item is not available for shipping

How do rebates work?

Please provide your date of birth
and zip code so we can determine if
you're eligible for this rebate.

You are not eligible for this rebate

Unfortunately, you don't
meet the location requirements for
this rebate.

If you think this is a mistake, re-enter
your zip code to try again.

We were unable to update your zip code in your profile, but you can still continue with the rebate process.

Your profile has been updated.

Please connect a PayPal account so you can receive rebate payments.

The information you entered does
not match PayPal.

Please check your PayPal account
and enter the correct information.

Enter your phone number at the register when you checkout.

3 - 7 days after a qualified purchase, your PayPal account will be credited and you'll receive a confirmation email from coupons@email.coupons.com

Changing your order type may impact availability of items already in your cart.

You’re starting a DG Pickup order.
Please confirm the store where you want to pick up your order.

Want to remember this item for later? Move it to your shopping list

Do you want to cancel this order?